I know it’s been a while since the last post, but I think these juicy new details will make up for it. As a reminder, Dominus Galaxia is a project that was a result of merging Jeff’s project and Beyond Beyaan together. What BB lacked, the other had, and vice versa. The first few months were basically spent getting everything from Beyond Beyaan’s code working in Unity and ironing things out. More recently, we’ve been able to focus on adding new functionality.

Before I continue, I want to clarify again that people who purchased Beyond Beyaan before it became free will get Dominus Galaxia at release at no additional charge. There were some misunderstanding when the projects merged that had some people upset. To be frank, we should have communicated our intentions better and I’m throwing this out here to be extra sure that the news reaches everyone.

Now for the juicy details!

Ivan has implemented a very powerful data parsing engine in DG! Right now, we can define colony sliders, buildings, technologies, and ship equipment from data. We’re limiting it at that for the time being, at least until the game’s release. We hope that we’ll add flexibility for other kind of data modding after release, but we’ll see how things go. Our first priority is to have an ironclad release with as few bugs and as much polish as possible. However, a side effect of being able to modify data is that it requires AI to support scripting as well in order to handle changes in the data. For example, if you take out factories and replace it with something else, how would AI know what it needs to build to boost production? I was able to integrate a C# Sandboxing asset from the Unity asset store into the game which allows C# scripts to be parsed at run-time and act as if it’s part of the game. With this, user created AIs can be crafted to go along with alternate datasets.

Remember fuel range circles from Beyond Beyaan? They were very helpful in showing where your ships could go. I’ve managed to re-implement it again in Dominus Galaxia, with a slight difference. It shows the actual range with the current selected fleet, not a two-tiered range. So if you have both colony and scout ships selected, it shows the regular range. But if you have scouts only, it shows the extended range. Oh, it’s also way more shiny! Here’s what it looks like in all of its glory (click to enlarge):

Some of you may have noticed that there’s no stars outside the fuel range. This is intentional, as we want to expand on the “Explore” aspect. In many space 4X games, when you start the game, you can see where you are relative to others, and can make long-term plans from the very beginning. However, we want to tweak that a bit, and show only “points of interest” within radar range. We will add fog of war to show the radar range.  This is dispelled when you colonize or send ships near edge of radar range. So right now, fog of war is functional internally as it doesn’t show hidden areas, but there’s no visual “fog” quite yet.

Ivan has also been working on the research screen where you allocate amounts of research to different fields (oh, by the way, you can also define technology fields in data!). It’s nearly complete, and we’re excited to have it in the game! However, the majority of our UI so far consists of placeholder (albeit massaged) artwork from Beyond Beyaan. So when we post screenshots of research screen or any other screens with UI, bear in mind that the UI elements (background, buttons, etc.) are likely to change.

Now for a bit more exciting news! Jeff has been working hard on space combat! The basic functionality is almost done, although there’s still missing features (missiles, torpedoes, bombing planets, explosions, etc). We’re doing turns a bit differently from other turn-based space 4X games, in that the better initiative a ship has, the more likely it is at getting turns before other ships, and sometimes even twice before a slower ship gets its turn. The reason for this is that smaller ships moves faster and fires faster than huge lumbering ships. We will play-test this extensively, and take in feedback to ensure that it’s all balanced. Of course, there will be UI feedback showing the precise move order of units. Here’s a preview screenshot of the space combat (click to enlarge): 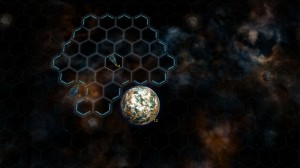 One cool feature of this is that space combat will support up to 7 sides! 6 attackers, and 1 defender if the planet is owned. So if you and an ally arrive at an enemy’s planet at the same time, all three sides will engage in combat at once. We also plan on having transports be a part of space combat, so you can try and capture the planet during combat. If successful, this will turn any remaining missile bases against their former owners! The ground combat mechanics will be similar to Master of Orion 1, using population transports and roll mechanism, but we’ll tweak formulas to ensure it’s balanced.

The saving/loading of games are functional as well. I’ve started work on the ship design screen, and we hope to have it and space combat fully implemented by end of October. Ivan should finish the research screen by then as well. If all goes well, it means at end of October, Dominus Galaxia can be played from start to end, albiet with a lot of missing features like diplomacy, spying, random events, racial bonuses, etc.

And finally, the most exciting part of the post, the new race artwork! Some of you may recall Beyond Beyaan’s pixel art. We discussed about what we wanted the game to feel like and we decided on a gritty realistic, but still somewhat silly (such as space monsters and some other things) atmosphere. We want the game to feel atmospheric everywhere, and not break immersion anywhere. So some of the races from Beyond Beyaan are out as they’re too silly. But some we’re keeping (Zero People, Humans, and few others). We found some truly exceptional artists, and they’ve come through in a big way. Remember this adorable spider from Beyond Beyaan? 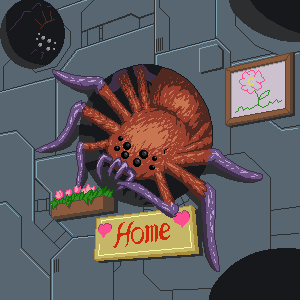 Well, they aren’t so adorable any more!

This is still a work in progress though. Before you say “That diplomat screen looks awesome!”, this is actually the research screen. That’s a spider scientist coming in to give you its report on the recent breakthrough. It’ll play once per game, then afterwards the tech discoveries will skip this animation to avoid being tedious. But the scientist will be animated during the presentation of new technology. Same with spy and soldier versions.

We’re still not sure what the spider race should be called. We talked a bit, and decided that we’ll have a naming contest for the spider race (maybe other races in the future, but we’ll see). Post a suggestion of the spider race’s name in the forum thread here, and if we like it and use it in our game, the winner gets rewarded with a copy of Dominus Galaxia, plus early access and a mention in credits! We’re not sure how early access will be done yet, but when we figure it out, the winner will be notified as soon as it’s set up. For legal reasons and stuff, the name must not be trademarked/copyrighted, and if we do use it, it becomes part of Dominus Galaxia’s trademark/copyright/legal mumbo jumbo stuff/etc.

This kind of artwork, while excellent, is not cheap. Jeff has funded it himself, but only has limited funds. I’ve spent all the money raised from Beyond Beyaan kickstarter on pixel art for BB. I actually managed to meet my goal from kickstarter, which was to have 13 races, complete artwork for space combat, and everything needed to make a complete BB game. I didn’t use the money for myself, or any nefarious purposes. We’re seriously considering finding avenues of raising funds for additional artwork, models, and sounds. Jeff has sufficient resources to continue working full-time on the game for a while, but the more he pays for artwork, the shorter his full-time ability will be. We’ve considered doing a kickstarter for Dominus Galaxia, and we’re very well aware that many people are burnt out from backing kickstarter projects that never get finished, or games that are released but aren’t well supported or are released in at a poor quality. So we’ve decided on a rule before we even launch a kickstarter campaign that we must obey: It is that Dominus Galaxia must be fully playable from start to end, with all major features implemented, before even doing kickstarter. Things aren’t set in stone yet for funding plans, and we’ll see how things go.

If you’re excited from this post and want to ask questions or comment on some things, feel free to do so over here in the forums!

Thanks again for all the support!